At the beginning of this month I was lucky enough to attend SpotOn London (Science, Policy and Tools Online; #solo13), a conference focusing on how online tools and technologies can aid in the sharing, advancement and communication of scientific research. As part of this ethos SpotOn strongly supports Open Access, ensuring all of the sessions can be watched live or recorded on their website. Having volunteered to get involved with the live streaming aspect of the event I was a member of the elite #StreamTeam, which also earned me a free ticket – WIN WIN.

As a PhD student, the majority of my previous conference experiences are of an academic nature. My adventures at both SpotOn London and the British Science Association Science Communication conference 2013 (SciComm 2013) earlier this year have highlighted to me the stark contrasts between the two conference types, both of which are interested in the communication of scientific research, albeit with different audiences in mind. As an individual flirting with both types, I’d like to use my experiences at SpotOn to highlight key areas in which I believe many academic conferences show marked scope for improvement.

At an academic conference, talks last for 20-30 minutes but can feel like they last for 20-30 hours (!) whereas at SpotOn, sessions were 1 hour long but flew by as if they lasted 10 minutes (and not just the ones that involved playing with LEGO)! 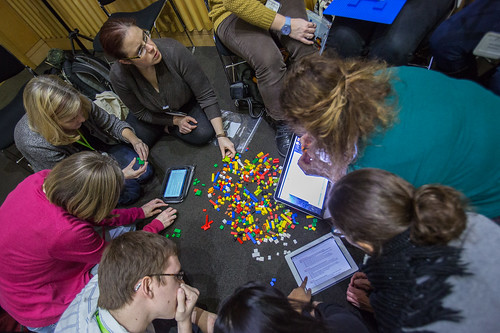 Perhaps this is simply my brain telling me an academic career is not for me, but feedback from fellow scientists, with a range of career goals, generally supports this view. I believe the answer lies in the session structures, which to some extent are limited by the content and aims of the different conferences. Standard academic conferences consist of highly structured, data-filled presentations with a very small time frame for Q&A. Contrastingly, SpotOn sessions ranged from interactive workshops to open panel discussions. In the latter, very short introductions were given by each panel member before the discussion was opened up to the floor for audience participation. Although this can make these sessions unpredictable and it can be difficult to reach significant conclusions in the allotted time, it does provide everyone with an excellent opportunity to have their say. 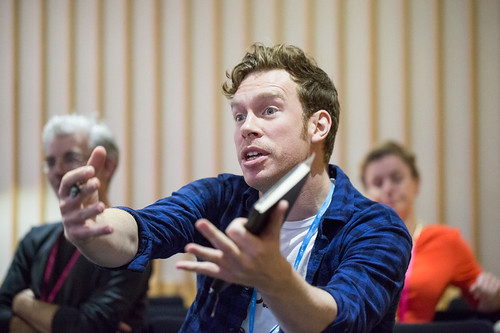 I’m well aware that presenting your data at conferences is important and I’m not naïve enough to suggest that this should not happen, but I do believe that integrating some interactive panel and audience discussion sections on broader topics or areas of debate within the conference subject area would offer variety and interest to an academic programme and help everyone feel like a relevant and contributing member of the field.

As mentioned previously, I was involved with the live streaming at SpotOn. This meant that any people not able to attend the conference were able to watch any sessions live on the website. Three themes (Policy, Outreach and Tools) were running concurrently throughout the conference, therefore as well as enabling non-attenders to follow the progress of the conference it also allowed attendees to view clashing sessions post-event. People could also participate in the conference through social media, including Twitter; many attendees were actively live tweeting with each session having its own hashtag (some examples including #solo13carrot, #solo13lego, #solo13blogs and #solo13dark). Such is the popularity of this added conference dimension that several SpotOn hashtags ended up trending on twitter, meaning that they represented a significant amount of the twitter traffic going on in the area at that time. Tweeting is a novel and exciting way to air your feelings about the sessions and the event itself, and also connect with others in real time, permitting everyone to express their views, irrespective of their significance within the field. 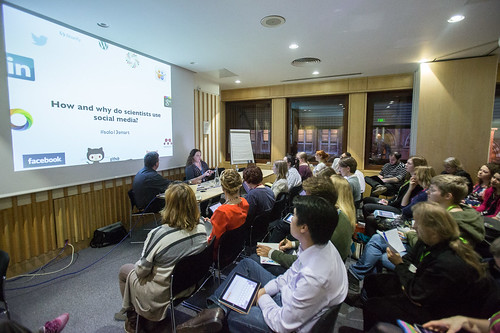 This online presence is now inherent across many fields, especially relating to communication, media and journalism conferences where rapid communication is commonplace and vital to success. Yet in academia it is almost unheard of and was completely new to me when I attended Sci Comm 2013: it is neither encouraged nor discouraged at academic conferences, it is simply absent.

The benefits of integrating both live streaming and Twitter into the academic science world is currently being severely underestimated. It would allow scientists from around the world to follow progress and get involved with any conferences they’re interested in – without the need for time out from the lab or travel expenses – giving live feedback and also allowing a wider degree of networking. One major problem standing in the way of this is that at academic conferences the majority of scientists tend to present unpublished material and would therefore not welcome the online presence. However, in an open forum like a conference, where all of your major academic competition is likely to be present, and especially given the increasing roles of modern technologies (smartphones with cameras, recording devices and e-mail; even when used innocently) in our lives, it should be expected that others will pick up on your interesting data. As such, you shouldn’t be saying anything in public (never mind on stage) that you don’t want people to know about, and with this in mind, it seems foolish to miss the massive networking and feedback benefits of social media because of an ingrained but predominantly irrational fear of competition.

Using Twitter is not a ‘requirement’ at a conference. However, a name badge is! Coming in all shapes, sizes and colours, our badges contain simple details such as our name and our affiliated institutions. SpotOn took this to a whole new level with the introduction of interactive name badges, created by Blendology. These snazzy gadgets allowed conference goers to ‘tap in’ with people they met and interacted with, creating an electronic timeline of who you met and when. 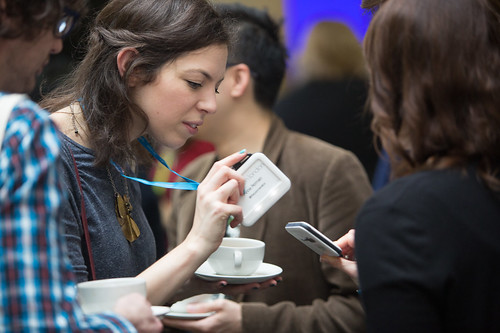 Seen as a modern approach to the business card, you were then able to access information for the people you had ‘tapped’, including their email address and Twitter handle. Each delegate’s Blendology profile could be personalised in advance, so everyone had full control of what information was shared. Despite a small amount of animosity from people concerned with handling of the data generated, I’m sure the majority would agree that these were a superb icebreaker and common conversation topic (not to mention generating a few games) thereby making networking a much less daunting task. I think these interactive badges would be an asset to any conference, with the possibility for the data you can share being endless. Their implementation at science conferences could be of real benefit: imagine being at an academic conference, networking and collaborating with fellow scientists, and upon ‘tapping in’ with them knowing that alongside their key contact details you have just obtained the links to their key publications. I think in a few years time these will be conference stalwarts. Not to mention they’re vital if you’re the sort of person who is hopeless at remembering people from their name alone.

At academic conferences, I am scared to speak to anybody who is not a fellow PhD student. There is a social hierarchy that we are afraid to break. SpotOn was attended by lots of important people, but yet I was not as afraid to speak to them due to the more open and relaxed conference environment. Are academic conferences in desperate need of a shake up? Should we be looking to these modernised communication conferences for inspiration? SpotOn and Sci Comm 2013 opened my eyes to what I believe academic conferences could become: a much more engaging and enjoyable environment in which scientists and science as a whole can thrive and evolve, developing science into a more open and accessible area that uses technology to interact more directly with everyone. 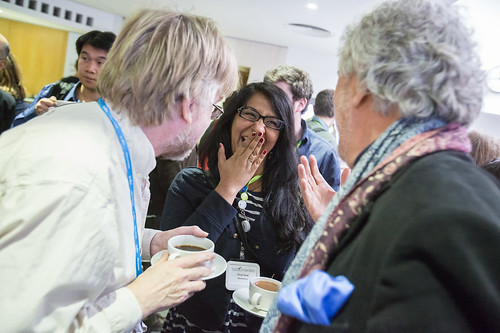 Getting inside Science and having a poke around!

Science, art and a sprinkling of fairy dust

The one-stop shop for who's doing what in Science, Technology, Engineering and Math

Add a Little Reason to Your Day

The public, their health, and democracy