A Series of Fortuitous Events

Apologies for the delay between posts – I do have a good excuse; I’ve been in Australia on an extended conference trip. This post is about my metamorphosis from recent University graduate to jet-setting research scientist.

In 2007, I graduated from University of Liverpool with a 1st-class honours degree in Genetics. I was over the moon – but now what?! What should I do next? What did I want to do next? 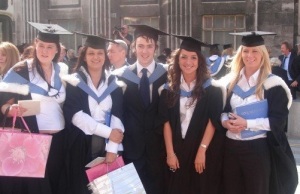 As I had no plan for the future, and judged myself to be extremely inexperienced in the scientific working world – a degree is great for theory, but you don’t get much practical research experience – I decided to glean some experience, offering myself as an unpaid volunteer at the Cytogenetics department of the Liverpool Women’s Hospital. This provided me with an excellent opportunity to develop and grow as a young researcher, learning valuable skills as I moonlighted across various specialities.

After working for a few months they offered me a paid position, which I happily snapped up. I was thrilled that they were clearly satisfied with the work I’d been doing for them. However six months in, it had become apparent that Cytogenetics was likely to fall by the wayside as molecular biological techniques advanced and became more widely implemented.

I began hunting for something new and applied for a research technician post in the Pharmacology department of the University of Liverpool. Whilst I wasn’t awarded the position, due to a lack of bioinformatics (computational) skills, there was a silver lining; I had impressed the interviewers enough for them to offer me a similar position at the Royal Liverpool University Hospital (RLUH). This alternative was part of the National Institute for Health Research (NIHR)’s Biomedical Research Centre (BRC) scheme; just one informal interview/chat with RLUH’s Research & Development team, and I had a new job!

During the first few months, my new boss often repeated the NIHR’s stance on career progression, hinting at the possibility of undertaking a PhD part-time alongside my current work. This could take anything from five to seven years – I was unsure, that’s a lot of time to commit in your early twenties. Did I want to tie myself down to something I hadn’t even considered until he brought it up? Was I cut out for it? However, Dr Swale did have a nice ring to it!

Here I fast-forward through a year of monotony. The hinting at a PhD continued, but nothing real seemed to come of it and the amount of work I had to do was limited; I wasn’t feeling challenged, and wanted to be doing something more engaging and useful. It was at this time that I applied for the Civil Service’s Fast Stream process, specifically to be placed with the Ministry of Defence (MoD). After a rigorous application process I was invited to London for the final testing stage, an intense urban survival course, where I had to save 2000 hostages whilst protecting the queen from an extremist terrorist cell and prevent hackers from accessing MI6 secret databases. Or it involved lots of presenting, writing and non-verbal reasoning – I can’t quite remember which.

The day the Civil service rejected me was the exact same day I had a meeting with my boss and the Liverpool BRC coordinators, finally having agreed that they were willing to arrange to fund my part-time PhD. The timing of these two events seemed too fortuitous, and as I still had no alternative life plan I enthusiastically accepted their offer. I was now a part-time PhD student, with five years of funding and a project that expanded on the work I’d already been doing as a technician making use of my skills and experience. For the next two years all was rosy – more or less, PhD work is rarely straightforward. I progressed well and posters showcasing my work won prizes at consecutive NIHR annual trainee meetings. Of course, things are rarely that simple….. 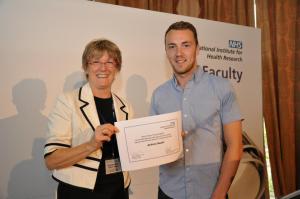 As well as having a centre in Liverpool, the NIHR BRC scheme had been rolled out around the country with BRCs and Biomedical Research Units (BRUs) in various cities across England. After 3 years, the scheme and the centres involved then had to be reviewed and their funding renewed. To cut a long, complicated and highly political story short; Liverpool failed their renewal bid meaning we had just 8 months (31st March 2009) until the money ran out. For a brief moment I thought, at least, I would be ok – they had guaranteed me five years of funding. How naïve of me: obviously this ‘guaranteed’ funding was based on the centre having money to fund me from. My PhD funding was being terminated. Thankfully, the NIHR offered me the chance to apply for an independent NIHR doctoral research fellowship that was centrally funded, which would give me secure funding to finish my PhD.

Of course, there’s no such thing as a free lunch, the application involved a 30-40 page form where I had to explain my needs, plans, current research and achievements etc. Those few months – waiting for a response from the NIHR and wondering if I’d wasted the last several years for nothing – were the most stressful of my life to date (although my upcoming PhD thesis writing and defense may change things). With a lot of help from my supervisors and colleagues, the NIHR agreed to offer an extra 18 months of full-time funding to get everything finished, the heat was really on.

At the time, the funding cut seemed like a catastrophe. However, looking back this was the best thing that could have happened to me. I was able to finish sooner than planned and their funding has allowed me to showcase my research in Germany (Munich), USA (New York) and now Palm Cove, Australia.

That funding expired at the end of September and I now have until 31st October 2014 to complete my thesis, unfunded. In some ways it’s very much like being back at the beginning, volunteering in cytogenetics.

Despite the prestige associated with a PhD, they are not necessarily a perfect fit for everyone. I may not have been sure about undertaking the PhD. and I still don’t really know what I want to do next, but I do know that I have developed and enhanced many valuable transferrable skills; in particular, working well as part of a team, the ability to cope under pressure and a clear and concise writing style. Most importantly, this journey has helped shaped me into the person I am today and will hopefully stand me in good stead for whatever road I choose to go down next!

Getting inside Science and having a poke around!

Science, art and a sprinkling of fairy dust

The one-stop shop for who's doing what in Science, Technology, Engineering and Math

Add a Little Reason to Your Day

The public, their health, and democracy